Just letting you know that “Chrysanthemum Seal” is now available in paperback.

We’re travelling again this summer, so I’ll be mostly present on the other blog until we’re back to more stable conditions.

Also, if you haven’t yet checked out my old short story collection “Transmission” because you didn’t like the cover, it now has a swanky new one 🙂 Though the inside is still the same. But, if I ever add more stories to the volume you’ll be getting them for free with each update, so it’s best to buy now 🙂

That’s all for now, over and out!

Hi all, I’ve got some actual news for you this time!

First of all, The Year of the Dragon Book 5, “The Chrysanthemum Seal” is finally moving along nicely – I’m now at Draft #4, which means that, with luck, the book may be out THIS MAY! Make sure to mark that on your calendars. For me, that means I have to start thinking about the title and cover for Book 6 soon…

A group of speculative fiction writers over on Google+ teamed up to publish a yearly short story anthology, and the first volume is launched today. It’s called NovoPulp, and the reason I mention it is because you can find one of my short stories (published before in Transmission) there along with many others. Do check it out – the stories are all good, and the quality of the edition is very high – there are even colour illustrations!
If you hurry you can sign-up for a giveaway over on NovoPulp website HERE.

Finally, later this month (April 21-27) I’ll be taking part in “SteamLit” Steampunk Extravaganza – a sale event, in which 13 steampunk writers lower their prices by half. So it’s yet another chance to grab the first four volumes of “The Year of the Dragon” at a bargain, just in time for the fifth book!

First: “The Shadow of Black Wings” is FREE until February 6th. If you know somebody who still didn’t get a copy, now is the time!

The epic fantasy novella “Dragonbone Chest” is now available on KOBO, as well as AMAZON, and now has not only a new EPIC cover, but also contains a short story set in the same fantasy universe, “The Crown of Abyss”.

That’s about it from the publishing front. “The Rising Tide”, volume 4 of The Year of the Dragon, is still being edited, and I hope to have it out in April!
In yet other news, in February I will be working hard on getting the audiobook of “The Shadow of Black Wings” ready. It will be FREE for download from Podiobooks.com!
One of my posts was recently chosen as the best self-publishing advice of January by Jane Friedman!
That’s all the news for February, cheers all 🙂 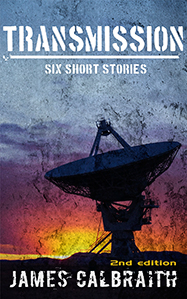 The first television broadcast signal is now almost 90 light years away from Earth. What would human colonists on distant worlds feel like receiving these ancient transmission for the first time?

TRANSMISSION has first been published in eFiction magazine in June 2012, and received Honorary Mention in On The Premises magazine in November 2012

FACTORY BLOCK S3 has not been published before.

A day in the life of a member of the RSPD – the Royal Society for the Protection of Dragons.

THE TWITCHING has been first published on Wattpad in July 2012

In a world of the luckless, the Lucky Men are kings.

Every God has to start somewhere…

TEOPHANY has not been published before.

A lot of things to cover today!

First off: my short story collection, “Transmission”, has just DOUBLED in size! That’s right, there are now SIX stories, not three! Three new stories are: The Twitching, O Lucky Man! and Teophany.

To celebrate the relaunch, the collection is FREE all day today on Amazon. If you bought the book earlier, a free update is coming your way.

Oh and by the way – “Transmission” got honourable mention in this month’s On The Premises magazine, so be sure to check them out.

And Transmission is not the only thing FREE today! In a ONE DAY HAPPY DIWALI PROMO, two more of my books are FREE right now: Dragonbone Chest (fantasy novella) and The Shadow of Black Wings (1st volume of “The Year of the Dragon“)

So my short story collection, “Transmission”, is finally available on Amazon. It’s not my main production this week – the big one is still in the works – but it was useful to test the waters and learn a few things about how publishing on Amazon works.

You’d think the actual act of putting the book on Amazon would be the easy part – what with having to write the stories, formatting, making a cover etc. – but you’d be wrong. The KDP interface leaves a lot to be desired, and this weekend was a hard one. But I’ve learned, and that means when the time comes for the big one, I will hopefully make less mistakes.