I got the proof copies of “The Rising Tide” and “The Year of the Dragon” bundle today from CreateSpace. That means the paperbacks are now available on Amazon.

I only really create these paperbacks for the fun of it, and to have

physical things as giveaways and gifts. The profits from POD are meagre: a little more than a dollar per copy, despite the price. Still, it’s nice to have a physical object to represent two and a half years of hard work. At 820 pages, the book weighs 3 pounds and is almost 2 inches thick. It’s definitely a THING. I have created a THING.

The Rising Tide paperback looks nice too, of course 🙂 It all grew to a pretty substantial bookshelf, with four small books and one huge one. And now if you’ll excuse me, I’m back to writing – time to create some more THINGS 🙂

PS: The Year of the Dragon bundle contains a new map, unavailable in other editions: the Map of Gwynedd.

Day 7. What do I have for you today? Well, the paperback of volume 3 has just gone up on Amazon – “The Islands in the Mist”, so that’s today’s event. Just in time for Christmas, you can buy all three volumes of The Year of the Dragon in physical form 🙂

ALSO! This week Amazon opened two new marketplaces where you can buy KDP books (including mine) – CANADA and BRAZIL.

You can find my books on Canadian Amazon HERE

And on Brazil Amazon HERE 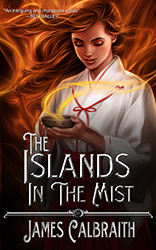 The Islands in the Mist
(The Year of the Dragon #3)

Guided by the mysterious samurai, Bran and the girls reach the fabled shrine of Kirishima, where his dragon is held. But other forces are also keen to put their hands on the prize…

The Black Wings have landed, and Edo is in turmoil. So is Kiyo, after the recent disturbing events. Doshin Koyata receives a strange blood-red signal in his dreams…

In Qin, Dylan trains an army of volunteers to stop the onslaught of the Rebels, with the help of an old Admiral – who seems to know many secrets…

A detailed and fast-paced historical fantasy based around the turbulent opening of Japan to the West in the middle of the 19th century, “The Islands in the Mist” is the third volume in “The Year of the Dragon” saga.

Here’s the final part of the story of how it became a reality. Read the previous instalments here and here.

The cover, distribution and the final product.

END_OF_DOCUMENT_TOKEN_TO_BE_REPLACED

Here’s the continuation of the story of how it became a reality, which might serve as a guide for those who would want to follow my footsteps. Read the previous instalment here

Formatting the manuscript in three headaches.

END_OF_DOCUMENT_TOKEN_TO_BE_REPLACED

I’ve chosen CreateSpace for paperback edition. Ben Galley has a good write-up of all the Print-On-Demand solutions available in UK, but to me it was a toss-up between Lightning Source and CreateSpace, as these were the two that did not require huge up-front payments.

In the end, CreateSpace won because of its close affiliation with Amazon. As a beginner, I want as little fuss as possible, and CS’s automatic Amazon listing and support was just what I needed.