When it comes to spending free time, I’m a city boy through and through. Give me a choice between a sunny beach and a historically and culturally rich city, and I will probably… do both 😉 But if that’s impossible, I would much rather take a stroll down some narrow alleyways of an old town than suntan (especially if it’s 40C and the old town in question is fountain-rich Grenada)

That said, even I can get bored or tired of asphalt and concrete. When that time comes, I venture forth in search of some oasis of calm and quiet in the middle of the city. All good cities have them: either public parks, or temple gardens, or urban forests. But the ones that really remain in memory are places that have that little something extra; a spark of brilliance or a touch of history that makes them stand out from the rest.

Here’s a list of my top 5 favourite of such getaways: all five are free to enter, though not always free to get to. You will notice these are also one of the top cities to live in, according to various surveys. It’s no coincidence; the best governed cities have also the best public spaces. END_OF_DOCUMENT_TOKEN_TO_BE_REPLACED

Things like this only happen in London: you go out to buy some organic veg, you end up in the first ever tube tunnel.

There was a Christmas Market at the Finnish church in Rotherhithe last Saturday. I’m not big on Christmassy stuff, but the Finns always sell the best stuff during the market – rye breads, Fazer sweets, frozen bilberries – so we decided to make a short walk from our usual Maltby St shopping (and coffeeing 🙂

(by the way: recession? what recession? judging by the way all of Bermondsey and Rotherhithe are being built up with new developments, one would be excused to think we’re in the middle of the greatest real estate boom in history)

As I have a recent obsession with the Brunels, we’ve decided to drop by the Brunel Museum nearby. It’s a very tiny place, in an old pump house for the Thames Tunnel – a few photos, a souvenir stall, a tv with Brunel’s bio and some artefacts from the digging of the tunnel. And they don’t charge much, just £2 for a walkaround.

But this time was different. The man selling tickets asked us – ‘are you here for the Christmas Special?’
Eh?
Three pounds extra. It starts at 2.
Okay, why not.

Five minutes before 2pm, a crowd of some 50 people gathered outside the museum. Obviously, something big was going to happen. We were led down a tiny, tiny entrance (had to crawl for a few feet) down a rickety, scaffolding stairway, into a vast, empty, circular underground chamber.

The grand entrance hall to the Thames Tunnel.

Looking rather less grand now. The railway company tore down the wooden staircase and all the decorations for fear of fire.

‘You are among the first people to have entered this place – after 145 years!’ announced our host, and began to tell us the story of the tunnel. Its many firsts. The first ever to be born under water. The first ever use of a tunnelling shield. The first ever underwater shopping arcade – after it turned out the tunnel entrance was too  narrow to carry cargo, the only way for the passageway to pay for itself was to sell souvenirs. The first ever underwater dining hall, ballroom, amusement fair. The story went on. All the while we heard trains running under our feet – if the floor was glass, we would see them, speeding between Rotherhithe and Wapping through the still used part of the tunnel. The pumps still pumping water out.

It was, for all purposes, just a big brick tank with some trains running through. But it was the basis for all underground railway systems in the world. Paris, Tokyo, Channel Tunnel – all built based on the same purposes.

And we found it on a random walk.
This is why London is the best.

(because this was such a random occurence, I had no camera with me – just managed these two snaps with my phone. it has a rubbish camera, and it was rather dark inside.) 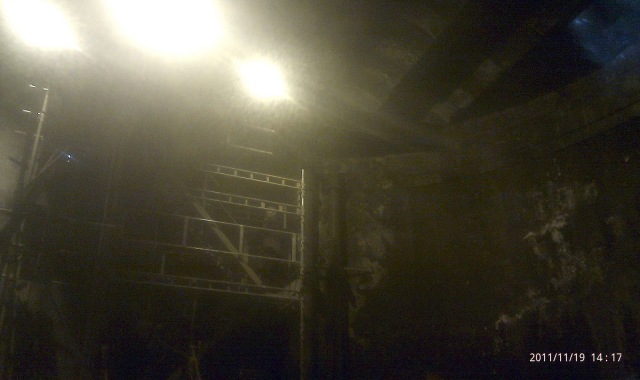 This site has much better photos of the tunnel itself – still in use, after all these years.