To the casual tourist, overwhelmed by its splendour, Kyoto may seem like an everlasting, unchanging city, with its ancient temples, regular street grid, and restaurants and guesthouses older than most countries.

In reality, it is anything but. The city had been undergoing changes since its inception; even the first ambitious, Tang-dynasty inspired plan for the Imperial Capital was never fulfilled before reality forced its gravity centre east, closer to the river. Over the following centuries, wars and politics, fires and floods had shaped the city with a constant flux, making the remains of the past all the more precious.

And it is still changing now. The changes range from subtle to dramatic, and perhaps none more so dramatic in recent years than the massive influx of tourists from East Asia. Always Japan’s busiest visitor hot-spot, Kyoto has now become Asia’s Venice, at times stifled and overwhelmed by the tidal wave of people. Not only the Chinese – though they are by far the most visible – but Koreans, and ASEANians have joined this multitude; with its 1.4 mln population, Kyoto is relatively tiny by Asian standards – a mere fraction of places like Hanoi, Seoul or Bangkok, not to mention Shanghai – so it doesn’t take much for it to feel crowded.

The most immediate effects on the tourist infrastructure are drastic, but of course not all bad. Gone are the “busy” and “quiet” seasons – the Japanese may only care about Kyoto in spring bloom and autumn leaves, but foreigners come and go as they please. The influx of money is noticeable – new ryokans, shops and restaurants spring up everywhere, old ones get a new coat of paint and some badly needed update of decor. Enriched by increase in taxes, the city splashed out on fancy new boulevards all along the Kamo River. Knowledge of English language is now properly enforced: the “old guard” of native English speakers from US or Australia may have been more tolerant of the Japanese ways, but the new tourists had to learn English themselves, and they don’t have patience for the clerks and cashiers being unable to utter anything beyond a few platitudes. In a surprising twist, it seems the locals now welcome Western faces with relief and almost joy: such is the paradox of the casual xenophobia that makes the old, familiar devil appear better than the new one. And yes, some of the new wave can be famously rude, and each such trespass of manners is widely reported in the local media, but before the Chinese it used to be the Americans who bore the brunt of all that pointing and mocking, and let’s face it, compared to the Japanese anyone will seem rude and obnoxious.

But that is not the only thing that’s changing in Kyoto. The other change is more subtle, one that needs several visits to appreciate: the skyline. The modern buildings in Japan tend to have a lifespan of about 20-30 years. That means most of the current crop, built at the threshold of the Lost Decade, is now horribly outdated: bad taste renderings of post-modernist kitsch, gaudy monstrosities in raw concrete and ceramic tile. Luckily, this era is coming to an end. One by one, the old cubes are being replaced by buildings of the new style. Gone is stained grey concrete, shaped in random protrusions, patched with plastic or ceramic to look like a bathroom turned inside out. In its place are black panels, cold steel, wood trimmings. The gaudy arrogance of the 1990s is replaced with the subdued elegance, matching the old environment rather than shouting over it. It is all very heart-warming, though it does keep me wondering if in 20-30 years these new builds won’t look just as old and out-dated?

And then there’s yet another change – the cars. For some unfathomable reason – whether it’s the newly found confidence in Abenomics, prevalence of hybrid engines or changes in road tax – or all of the above – the Kyotoites ditch their fun and practical, colourful, small kei cars, in favour of massive, tank-like people movers, all shining chrome and black steel. Once cars like these would have been the domain of mobsters and celebrities, now they’re parked everywhere, sometimes dwarfing the houses they’re “attached” to. Quite what anyone may need these monsters for in the streets that are barely wide enough for two mopeds to pass, is anyone’s guess.

The smallest scale of change is also the most personal. Of the ancient couple making red bean paste sweets in Tominokoji street, only the husband remains fit enough to serve customers – the wife is now too frail and ridden with diseases of old age. Since they don’t seem to have any apprentices, inevitably one day we’ll find their small shop closed forever. And they’re not the only ones in Shimogyo-ku – these are the streets filled with tiny old shops run by tiny old men and women. Their passing marks the passage of time in the most poignant way. But despite all of this, the Kyoto – our Kyoto – remains, and, against the odds, thrives. 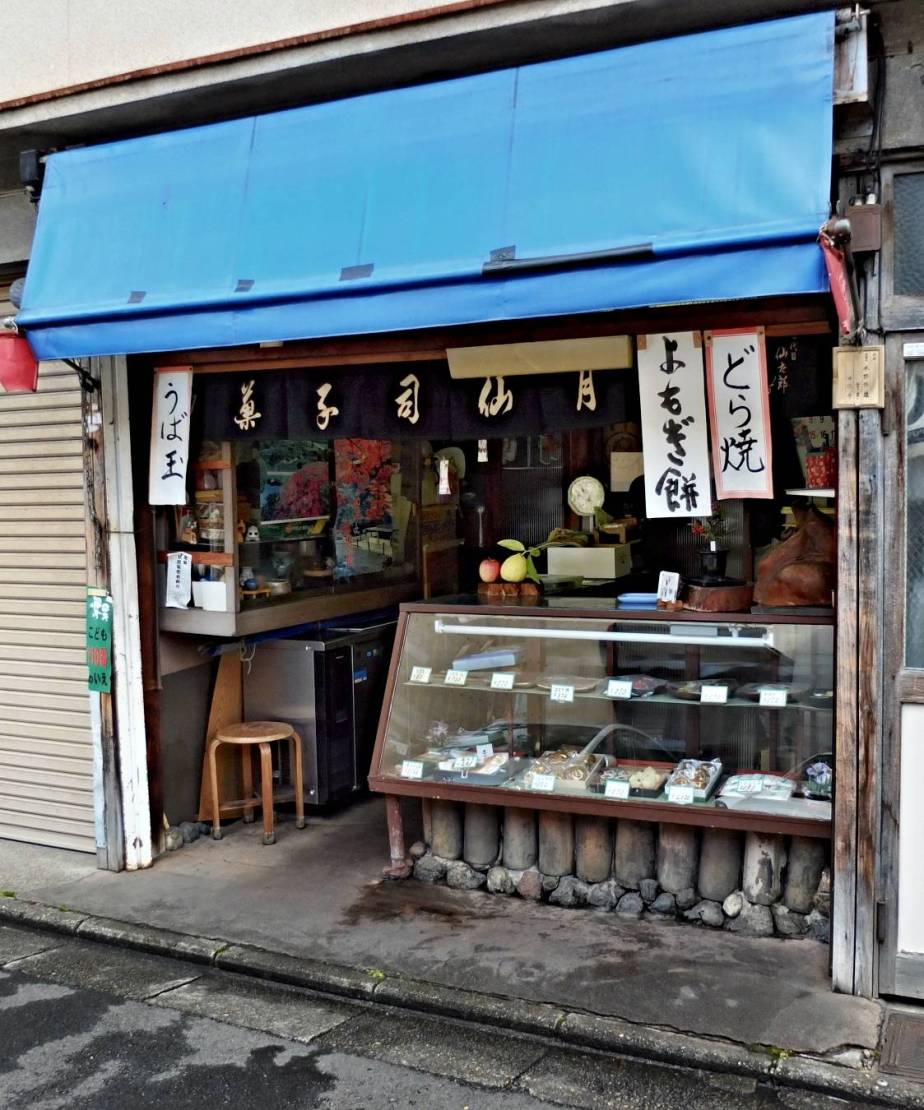 I’m aware that this is a very niche post. Treat it as a little, disturbing glimpse into what I sometimes find interesting 😉

As I’ve mentioned before, the outsides of many buildings in Japan’s cities resemble the insides of bathrooms: the walls are covered by thousands of tiny, shiny ceramic tiles. I had noticed this phenomenon before, but always dismissed it as one of the many quirks of Japan’s modern architecture – like putting conspicuous Mickey Mouse ears wherever possible, or ending even the most perpendicular, simplistic tower blocks with oddly decorative finials. This year, however, I began to notice it more, and suddenly it was everywhere: if a building is not made of wood, it’s almost bound to be tiled. So I simply had to research it.

Turns out, this is not just a strange aesthetic choice, but a practical solution to a double problem that plagues Japanese cities: earthquake and harsh climate.

Earthquakes render brick buildings mostly unusable. In an earthquake, a brick house falls apart like a house of cards, burying everyone inside under a pile of clay cubes. Most of the existing brick buildings in Kyoto are listed municipal features, like the City Museum.

This gives you a choice of two other building materials: wood and concrete. Wood is expensive in maintenance, and doesn’t allow to build high, so unless you’re well-to-do townsperson wanting to have a villa, you’re left with concrete. Also, concrete trade is subsidized by the government, which makes the choice even more obvious.

However, raw concrete has two important disadvantages: one, unless you’re going for raw brutalism deliberately, it’s a damn ugly material: grey, drab, featureless. More importantly, it is not well suitable for Japan’s difficult climate. The immense humidity of the rainy season and the extreme heat of the late summer quickly erode raw concrete, eating through it like so much butter. Any un-clad concrete house in Kyoto is covered in vast damp patches and scars of acid erosion. This situation called for a drastic, innovative solution.

The Japanese realized that the conditions outside in the rainy months resemble closely those inside a used bathroom (as anyone who’s spent a summer in the semi-tropics can confirm). And what best protects the bathroom walls from erosion? Ceramic tiles!

And that’s the reason. Tiles protect concrete from the dampness. Concrete protects inhabitants from earthquakes. Both problems are endemic to Japan, and the solution is fairly ingenious; unfortunately for a place like Kyoto, the result is only minimally better, aesthetically, than leaving the raw concrete out (and often worse) – a price of compromise, I suppose.

When it comes to spending free time, I’m a city boy through and through. Give me a choice between a sunny beach and a historically and culturally rich city, and I will probably… do both 😉 But if that’s impossible, I would much rather take a stroll down some narrow alleyways of an old town than suntan (especially if it’s 40C and the old town in question is fountain-rich Grenada)

That said, even I can get bored or tired of asphalt and concrete. When that time comes, I venture forth in search of some oasis of calm and quiet in the middle of the city. All good cities have them: either public parks, or temple gardens, or urban forests. But the ones that really remain in memory are places that have that little something extra; a spark of brilliance or a touch of history that makes them stand out from the rest.

Here’s a list of my top 5 favourite of such getaways: all five are free to enter, though not always free to get to. You will notice these are also one of the top cities to live in, according to various surveys. It’s no coincidence; the best governed cities have also the best public spaces. END_OF_DOCUMENT_TOKEN_TO_BE_REPLACED

I’m in between releases (Transmission is done. “The Shadow…” is coming soon) and my mind is exhausted by the work and the heat, so here’s, as they say, something completely different: a list of my favourite ice cream.

These are not the best ice cream in the world (although some claim they are) but for one reason or another these are the ones I either remember most fondly or like to eat most often. Ubiquitous in the cities of Western Europe, this is a refuge of an ice-cream lover who is lost, tired and in dire need of frozen desert. Be it Strassbourg, Grenoble or Soho, Amorino delivers quality and low price to the hungry masses.