I’ve recently come to terms with the idea that Quentin Tarantino is the only possible heir to Stanley Kubrick’s crown of the best Hollywood director of his generation. He’s not quite there yet – his hit-to-miss ratio is bigger than Kubrick’s – but I don’t see anyone else emerging from the herd at the moment. Now bear with me, as I explain my reasoning.

And of course, this is Tarantino’s trademark as well. His own generation’s idea of pulp: trashy crime dramas, blaxploitation, spaghetti westerns… and he’s turning it, in his own idiosyncratic way, into pure cinematic art.

After the initial burst of creativity in the late 50s and early 60s, Kubrick started taking his time with new releases. In 70s and 80s he did only two movies per decade, polishing each to perfection.

Tarantino made five movies in his first 10 years of career – and then only four in the next 15, including a half-hearted effort in Grindhouse and a six-year gap between Jackie Brown and Kill Bill. 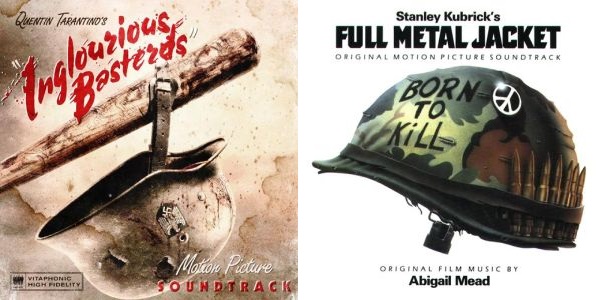 Ever since 2001: Space Odyssey, Kubrick disposed of the traditional soundtrack, preferring to use ready-made songs and instrumentals to great effect. His music choices were revolutionary, both inspired and inspiring, producing sequences which have no peers in cinema: the Blue Danube from Odyssey, the Singin’ in the Rain in Clockwork Orange, the Women of Ireland in Barry Lyndon.

Tarantino does exactly the same; reaching deeply into his personal collection of records, he creates the best and most innovative soundscapes in modern cinema. Never content with what the likes of Hans Zimmer or John Williams can give him, he plays with ready-made tunes to astonishing effect, and creates as memorable scenes as Kubrick: the twist in Pulp Fiction, Stuck in the Middle With You in Reservoir Dogs, Woo Hoo in Kill Bill…

2. Getting the best out of actors

Even in the weakest of Tarantino’s movies, I am awestruck by what heights of talent his actors strive for. Of course, they are always good or great actors in their own right, but you still need a skilled director to carve the diamond of an actor’s talent to perfection. I mean, just look at John Travolta. People say he got his career restarted after Pulp Fiction, but the truth is, he’s never had a better role since. Samuel L. Jackson is an all-around entertaining and fantastic actor, no doubt, but only Tarantino gave him an Oscar nomination.

Kubrick’s casting was always flawless – and often idiosyncratic. You can’t really imagine anyone else play Jack Torrance, David Bowman or Alex, even though Keir Dullea or Malcolm McDowell were back then as unlikely choices for leads as Travolta or Pam Grier were in Tarantino’s days. Kubrick was the first (and for a long time, only) director who got Peter Sellers to play straight, to great acclaim. Finally, both Kubrick and Tarantino allowed their actors improvisation in key scenes, a trait shared with many other great directors, but which in their case made movie history every single time.

On one curious occasion, their tastes in actors almost converged: it may well have been Kubrick who gave Uma Thurman her great breakthrough role, in Aryan Papers, rather than Tarantino.

There are three parts that are necessary for a movie to be considered great: script, acting and cinematography. Kubrick’s movies had all three – everyone knows that. His movies are pure visual bliss; but so do Tarantino’s, perhaps surprisingly for those who only regard his work as over-ambitious schlock.

The way Tarantino works with the camera, when he’s at his best, surpasses pretty much anything other block-busting directors currently achieve. “Impeccable” is a word often bandied about when describing his craftsmanship in Kill Bill, Pulp Fiction and Django. There is an almost baroque lushness to the way he plays with angles, lights and sets – much the same as with Kubrick.

Both directors have their famous trademark shots: Kubrick’s point perspective, Tarantino’s “looking up”. Both like to set their scenes like paintings. And Tarantino of course wouldn’t be himself if he didn’t sometime quotes Kubrick’s scenes verbatim (parts of Django are straight out Barry Lyndon).

And one reason why Tarantino is not quite yet Kubrick:

Kubrick was the James Cameron of his day and age; for every movie, he came up with a new toy; although never as flashy as Avatar’s 3D or Titanic’s CGI water, his technological innovations were recognized by the critics and picked up by the moviemakers.

Tarantino’s innovations are limited to editing and scripting; he lets Cameron be the Cameron  of his age, focusing instead on the fun of film-making. In fact, in his love of the old cinema, he’s positively a luddite: he loathes CGI. Paradoxically, his use of old school gimmicks, like the car chase in Death Proof, could be just the kind of technological revolution modern cinema needs.

Processing…
Success! You're on the list.
Whoops! There was an error and we couldn't process your subscription. Please reload the page and try again.
Back to top
Loading Comments...