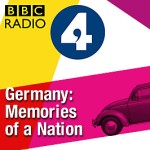 We traveled a lot through Germany lately: both its past and present borders. It is nearly impossible to travel around Europe without stumbling upon traces of Germany’s past glories and sins. From Riga to London, from a Hansa outpost on Aland to the Imperial Trieste, the German-speaking peoples have left an unforgettable imprint on the continent long before the atrocities of the 20th century; and having traveled first around the Baltic, then around Central Europe this year, I had plenty opportunity to ponder this grand nation’s history.

So the new BBC Radio 4 podcast series, Germany: Memories of a Nation, drew my attention instantly – especially since it’s headlined by none other than Neil MacGregor. A few years ago, the director of British Museum attempted to tell the story of the entire world in 100 objects. Now, he is retelling the story of Germany – in 30 objects. This new series is just as intrig

uing and engaging, and possibly even more eye-opening, since it brings out the little-known German art and architecture from the shadow of France and Italy. Holbein, Riemenschneider, Caspar David Friedrich are just few of the names covered, among subjects that range from Stasi to Charlemagne’s empire – with the Holocaust, naturally, underlying it all, as it forever must.

The series is half-way through now, and you can catch it on its podcast page here. Go hear it. Now.