I promised and promised, and looks like I am finally about to deliver! I have finished the final draft of the Withering Flame, sent it off for proof-reading, and set up an exclusive pre-order on Amazon. That’s right – you can now pre-order Book Six of “The Year of the Dragon”, scheduled for release on June 4th!

For centuries, the world outside Yamato turned, while in the island nation, little changed. But the barbarians have finally broken through the gates, and the rebels have risen openly. 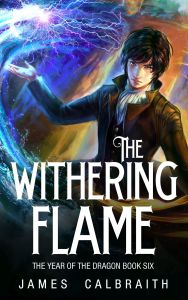 Bran reunites with his father on Dejima, just as the Bataavians and the local daimyo prepare to join the rebellion against the Taikun. Nagomi follows her visions across the Dan-no-Ura Straits, only to discover there is more to the Prophecy than she ever imagined. Sato and the Kiheitai, on secret orders from Lord Mori, rush to reach the Imperial Capital of Heian before the full might of Taikun’s army – and the Black Dragons he’s allied with.

The time for whispers and secrets is over. The dark clouds burst – and the bloody civil war is finally upon Yamato.

Click these links to pre-order “The Withering Flame” on Amazon NOW: