For Day 12 I have something for those of you who wait for Volume 4. Yes, it’s being written! I have just finished draft one, actually, and am now working on draft two. Here’s an excerpt from the current version. Keep in mind that as this is an early draft, the scene may change or even be removed from the finished manuscript. I tried to find something least spoilery 🙂 This will be somewhere at the beginning of the book.

(in other news: I just got all three paperbacks in post. They look really nice together! 🙂 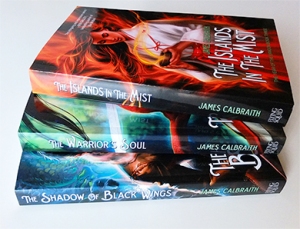 There was fresh blood on Dylan’s boots.
It came from a puddle he had stepped into a street earlier. Or maybe from another, a block away. There was no way to know for certain; all the streets of Shanglin were bathed in blood.
He stepped over a dead body and stumbled over another, lying just beside it. He didn’t look down; not anymore. They all looked the same, anyway: stripped naked, mangled, slashed with swords and burned with gunshots. Only the sizes and genders differed. The conquerors of Shanglin did not discriminate. Old men, children, women… all were piled along the walls and blood-filled gutters. The dead, black window holes of the burnt-out houses stared down at the carnage in silent accusation.
Dylan didn’t bother to count the slain. How many people had lived in Shanglin before the war? Ten thousand? Twenty thousand? How many more gathered here fleeing from the besieging Imperial Army? Only a few hundred women survived, spared for the soldiers’ entertainment. Another hundred may have fled into the marshes. That was all.
There’s always war in Qin, he thought. Not like this.
He climbed the arch of a wide bridge spanning one of the city’s many canals, and passed Qin soldiers guarding the passage. They let him through without a word, or even a bow. Dylan was too numb to take offence, although he did make a mental note of the guards’ behaviour.
Beyond the canal lay the Tianyi Gardens, where the conquering army made their headquarters. Even here there were traces of destruction and fire, though all the dead had been removed from the paths, and blood scoured from the gravel. Rose and camellia bushes were cut down to make place for tents. Soldiers sat on moss-covered boulders and stone benches around ponds, playing ma jiang for bits of Cursed Weed and money. Gold and silver coins, looted from the city’s treasure houses, were strewn all over the grass.
No discipline at all, thought Dylan bitterly. This rabble would never have taken the city without our help.
The Bohan set his staff up in the main lecture hall of the great Library Pavilion, a long, two-storey building with eaves like sickle blades pointing to the skies. Dylan found him studying a large map; several other maps lay scattered around the floor and tables.
“Ah, Commodore Dí Lán!” the Bohan welcomed him with a grin and open arms. “Come, join us. We are planning our next stratagem. What do you think of moving on Chansu?”
“Another siege?” Dylan asked. He dismissed a servant who offered him a cup of tea.
“I know you Dracalish like moving swiftly, but this is how this war will have to be fought for now, until we push those vermin beyond the walls of our cities.”
Vermin.
“Perhaps it would be easier to capture the cities if the defenders were given a chance to survive.”
“You don’t approve of our methods, Commodore.”
“No, I can’t say I do. I will write a report of all that’s happened here to Fan Yu.”
Bohan stood straight, letting go of the map; it rolled up with a rustle.
“These… rats dared to stand against the Mandate of Heaven. They got what they deserved. Besides, they had plenty of time to surrender without bloodshed.”
“Plenty of time? The siege lasted less than a week – thanks to our guns and our dragons.”
And you will want them again for the next battle.
“That was a week too long.”
“Her Majesty will not take kindly to having her troops associated with this massacre.”
The Bohan smirked.
“Do not presume to deceive me, Commodore. I know your orders as well as you do. You are to provide us with any assistance we require, in defence of your country’s trade interests – and provide us you shall. Speaking of which, I will need half a dozen of your dragons to…”
“Enough!” Dylan slapped his hands on the table. The outburst surprised even him. The Bohan raised a sharp eyebrow. “My men are not butchers! You can capture your cities yourself. Huating is safe, and that’s all that matters for our trade interests.”
The Bohan blinked, and then laughed.
“You want to teach me about butchery? You, a Westerner? I know you. You’ve conquered, enslaved, destroyed entire nations all over the world. You’d destroy Qin if you thought this was in your… interests. Oh, but you’re too shrewd for that. You prefer to kill slowly.”
“I don’t know what you’re talking about. Certainly, the Dracaland army never did anything like you did here.”
“No. I don’t suppose so. Not yet, at least. But your Weed trade killed more of my people than any war. And how many died of famine in Bangla because you took their fields to plant the Weed? So don’t you lecture me about butchery, Commodore Dí Lán, unless you want me to get better at it. Play war like the nice soldier you are, and we’ll all be free to go home in no time. Isn’t that what you want?”
Dylan said nothing. He turned on his heels and stomped outside, clenching his teeth and knuckles.
“I will send my requests to your tent, Commodore!” the Bohan cried after him. “I expect a prompt reply!”